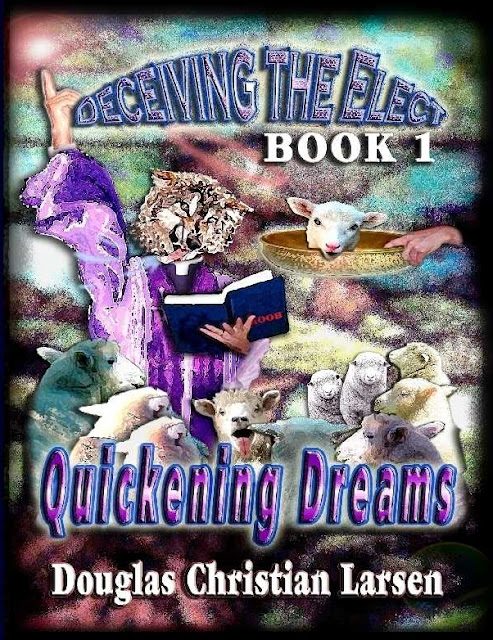 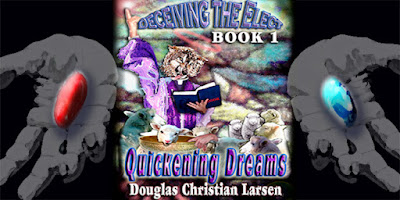 The story of a fellowship of world-weary people who hear the call of the still small voice, the call to a mystical quickening, their hearts and minds opening to the Ancient of Days and the whisper of Truth. It is also the tale of Jehovah’s Army (JA), a powerful new spiritual, political and mercenary juggernaut, forcefully shepherding all religions into one ecumenical force, marching under the banner of Christ. The first goal of JA: take back America for Jesus, and the next? Ultimately, the world. These men of God will usher in a new golden age of peace, under a new world order, where an anointed one will rule the world with a rod of iron. As the world sinks further into madness, a group of people brought together by the need for truth must stop religious fascism from taking control of the world in the new novel, Deceiving the Elect – Book 1: Quickening Dreams. Author Douglas Christian Larsen presents the first of a seven-part series about a new human revolution of the mind.

Set in a world that mirrors the present social climate, the first novel begins as a small group of unrelated people find themselves questioning all modernized dogma of organized religions after hearing a "still small voice" that wakens them in their dreams. World-weary ex-boxer Stacey Colton teeters on the edge of suicide until he hears the voice, which at first only seems to bring him trouble, leading him into an auto accident, which lands him in jail. On the other end of the accident, Bronte Chaplin, a music prodigy and dual victim of both a mind-control cult and an abusive ex-boyfriend, makes a prayer for the man of her dreams. Seconds later she is involved in an accident with Stacey. Instead of accepting his smiling face, she flees the scene.

Joshua Bouwer and Michael Potok are roommates and Sunday school teachers who have been searching 10 years for the "perfect church" to no avail. The two men are polar opposites. Joshua is a sloppy, seven-foot tall giant covered with a long beard and mountains of flesh. Michael is a small neat freak who has been shriveled by disease and childhood violence. Questioning whether there is a God, the two begin a Web site that investigates the teachings of false prophets and religious extremists. This work directly affects the Jehovah’s Army, a fascist group of religious extremists. Believing they were mandated by God to wage war on "the pagans," the army is commanded by an anointed one to create a global Christian theocracy that punishes the smallest infraction with swift, Old Testament justice. Buddy Nicodemus is a fervent soldier in this army who fervently lusts to stop these heretics, but his first confrontation with Stacey proves it is not going to be an easy task for either side to win.

How is it possible that intelligent, well-rounded, clear-thinking people can end up deathly silent on bunkbeds at Heaven's Gate, reduced to ashes at Waco, or a member of a New Age stadium-sized "mega church" robotically repeating whatever grade-school mantra they are commanded to chant? The "Deceiving the Elect" series explores how it is possible, that even the "elect" can be deceived, when they are willing to check in their intellect at the door, and invest their trust in a charismatic personality, and how the very best place for a cult to hide is right out in the open, bright-tailed and bushy-eyed, every Sunday morning. Conspiracy theories, whispers of illuminati and an ancient intelligence that has set in motion a 175-year deception to dazzle the entire world — to deceive, if possible, the very elect of God. Would you utterly lose your faith in the Truth if millions of people suddenly vanished from our world? Christ warned, implicitly: "DO NOT BE DECEIVED." 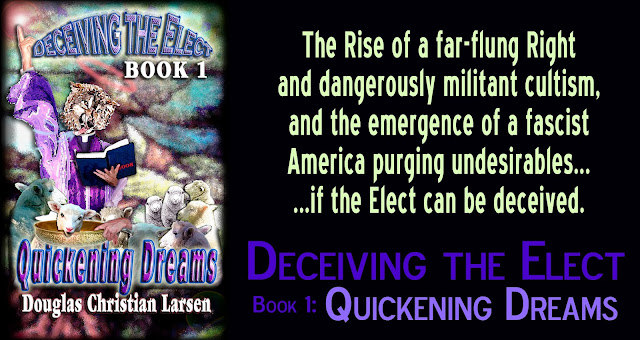 ©Copyright 2011 Douglas Christian Larsen. Deceiving the Elect: Book 1 — Quickening Dreams, by Douglas Christian Larsen. All Rights Reserved by the Author. No part of this book may be reproduced (except in the case of brief quotations embodied in critical articles or reviews) or transmitted by any means without the written permission of the publisher, Wolftales UNlimited.This book is a work of fiction. People, places, events, and situations are the product of the author’s imagination. Any resemblance to actual persons, living or dead, or historical events, is purely coincidental.

Dedicated to both:
my Wife, Carolena of the Angels,
God’s gift to me
though I deserved no gift
woman of substance
lover and friend

my Mother, Nancy Lee Larsen
faithfully read to me when I was little,
listened to my stories when I was bigger than little,
then read my stories though she is not a reader
throughout my life has taught through example
the meaning of “unconditional love”
(this, heroically, in spite of me being me)

Acknowledgements:
Eric Pichot, lifetime friend, reader
almost everything I’ve ever written
laughed at me — the appropriate times
laughed with me — the inappropriate

Irina Kocsis, friend and proofreader
who none too gently nagged down
most of the cruder characters in the novel

Prologue
For false Christs and false prophets shall rise, and shall shew signs and wonders, to seduce, if it were possible, even the elect. Mark

As he sat alone on the his talmidim came and asked, confidentially: “Tell us, when are these things going to happen, and what will be the sign that You are coming back, and that the world is ending?”
And Yahshua told them, “Be very careful, don’t let anyone deceive you. For Christians will claim they are anointed, and deceive many people. And wars and the threat of war will erupt everywhere.
“Don’t worry, because these things must happen, but still, it won’t be the end.
“Countries will attack each other, and rulers will fight each other, and many will starve, and disease will spread everywhere, and earthquakes will happen in surprising places. All these terrible things are the beginning of the earth’s birth pangs.
“Then they will arrest you, torture you, and even kill you, and everyone will hate you, but it will be for the sake of My name. Many of you will surrender to hopelessness, and begin to betray each other, and hatred will grow in your heart for each other.
“Many false prophets will proclaim themselves, and they will deceive many. And because the law will mean nothing to the world, the love in hearts around the world will snuff out like candles.
“But if you do not give up, you will be saved. And this Good News of the Kingdom will be told around the entire world, a witness to every nation, and only then will the end come.”
Matthew’s Gospel Chapter 24, Verses 3-14, from Michael’s Spiritual Notebook

We must believe in free will! We have no choice! - Isaac Bashevis Singer

If you would be a real seeker after truth, it is necessary that at least once in your life you doubt, as far as possible, all things. - Rene Descartes

Strange times are these, in which we live, when old and young are taught in falsehood's school. And the one man who dares to tell the truth is called at once a lunatic and fool. - Plato


Chapter 1
If there really is a God who created the entire universe with all of its glories, and He decides to deliver a message to humanity, He will not use, as His messenger, a person on cable TV with a bad hairstyle. - Dave Barry

Late Night TV Commercial:
A solemn man smiles poignantly into the camera, seemingly wise, familiar, and the picture of trustworthiness. “Hello friends. Has your life become a meaningless series of repetitive cycles? Has the glamour worn off your special relationships? Does everything seem boring? Camera slowly zooms in for extreme close-up. You can know your destiny. You can find peace on this earth. You can understand what life is all about. You can finally know what the plan for you is in this confusing world, what everything is really all about. Call the 1-900-number you see on your screen, and a knowledgeable medium will speak with you. Cut to row of phone banks peopled by attractive blonde women in mysterious and alluring robes; the women are serious, grave, and yet oh-so-personable as they connect with unseen callers. The same host in voice-over: The spirits know. The spirits are here to help. Find out what your guardian angels have to say about you. Please call today, because success and peace are just a breath away. Know that peace beyond understanding.

Channel Surfing Hastily Past Religious Channel:
Middle-aged woman in business attire, strolling before huge audience — at first glance this appears to be a business seminar, except on closer inspection the speaker’s fashionable “business suit” is strung with glittering rhinestones, huge mirroring “disco balls” suspend from each of her earlobes, and her sensible shoes are made out of the same “disco ball” material. …for there’s a deeper place. You all know this. Right? Amen. That’s the inner man. It’s the spirit. That’s the real you. Your body is just a container, a shell. Amen? Amen. The speaker appears to be angry, for she frowns and deep lines are formed upon her forehead and along each side of her mouth. Deep in her eyes it appears she is in some terrible distress, some deep trouble, but her mouth speaks boldly, contrary to the deep pain within her eyes. The Bible says we were created in the image of God. And so we are, we are tripartite beings — that means we are three parts, just like God, just like God — amen? Amen. Soul, Spirit and Body. Three.

Late Night Radio Talk Duzzbee Dirty:
I’m sick of it people, all this happy talk, all this stupid talk. Tell me, what’s this world coming to, is what I want to know? Anyone with half a brain out there reading me? Get out your WeeGee boards, folks, and receive my vibes! The world is going to hell in a hand basket and I’m sick and tired of all the whiney people, the bums and the bag ladies, the geeks, grunts and gooks! Let’s nuke’em is what I say. Nuke’em all, with the gays and the fundamentalists thrown in! Who’s your buddy? Tommy Crank is, that’s who! And I’m listening if you want to call and you think you can tell me what this world is coming to! Because that’s what I want to know!

Syndicated Radio with Samuele the Scripture Scholar:
…we must not separate over the minor issues, and most issues are minor. Let’s hold fast to the Gospel and like the Apostle Paul let’s attempt to know nothing more than Christ and Christ alone! And that’s about all the time we have for this edition of the Scripture Scholar, but we’d like to ask you all to remember us in your prayers, and remember, this ministry is supported by you, so any kind of donation is appreciated. You are making a difference, now, and for eternity. Thank you all, and God bless!


Storyteller Interim:
The Oldest Man in the World


Times are tough, friends, family and partners, but as long as you are out there making a difference, I and the Scripture Scholar team will be here, answering your most heartfelt questions. Please send us your support, and as a special offer this week we’ll send you a Scripture Scholar bookmark to mark your favorite spot in any of your Scripture Scholar library helper books — with a heartfelt gift of twenty-five dollars we’ll shoot out your bookmark today, and remember, this ministry is supported by you, so any kind of donation is appreciated. You are making a difference, now, and for eternity. Thank you all, and God bless! 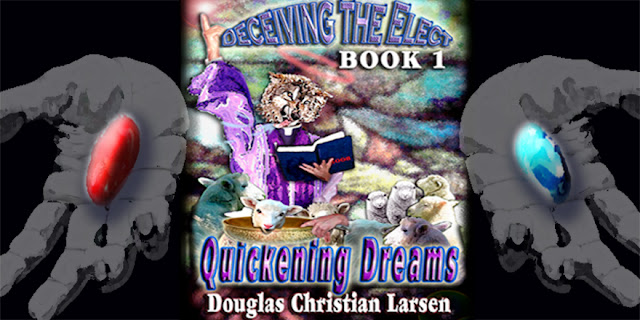