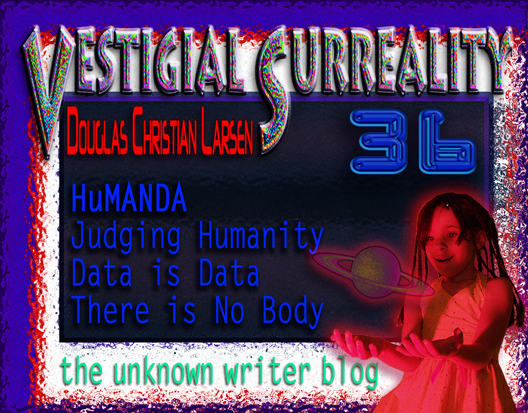 Seven opened her eyes. Her head flamed with fire, and she pulled away from the transference helmet. She held her temples.
“What’s wrong?” Charlotte, said with concern, leaning close, offering Seven a cup of tea.
“Oh get that away, I don’t need tea, for goodness’ sake!” and she knocked the cup and saucer out of Charlotte’s hand, but it vanished before striking the wall.
Seventy-One came in close. “It was Manda, wasn’t it? I could feel her, close.”
“Yes, it was VS herself, messing with me, but I don’t know how much of it was real. I was a doll or something, and she was trying to tell us something terrible. That something terrible is coming.”
“The End,” Charlotte and Seventy-One said together.

Jack inhaled sharply and stared about with wild eyes. Anne leaned in close above him.
“Are you okay, Beloved?” she said, and tried to help him to his feet, but he shook her arm off and huddled against rough bricks. They were still outside, somewhere on the Honey Moon, and the fog was thick about them. He heard something mechanical lumbering past on the street.
“I was just with Manda, she had turned me into a doll, and Stacey, and Seven, we were all there, and I think she was warning us.”
“What was she warning?” Anne crooned, snuggling in close beside him on the ground, trying to shield his body from the chilly fog.
“I think she was telling us that the end is coming,” Jack said, shuddering.
“The End? Oh, we’ve all known about that,” Anne said. “Yes, it’s coming. The End.”

Stacey opened his eyes, or his eye, because there was something wrong with his left eye. It ached. His whole body ached. And he seemed to be moving, rocking and bumping, and the sky above was dark. Where was he?
“I was a doll,” he muttered, and tasted blood in his mouth.
“Yes, you are my doll,” someone said next to him.
He peered. Someone was there, but it was too dark. They seemed to be in some rough cart or wagon, and he heard rough voices from all around. Men’s voices, and what seemed to be the bleating of goats, or sheep, and horses nickering. He smelled smoke, and meat cooking, and lots of overripe animal smells.
“Maully?”
“No, dear, it’s Emily,” the voice said, right by his ear.
That wasn’t a dream, that whole thing with the dolls, no it was too real. Someone was there. Jack, and Seven, and someone else. It was right there, on the edge of his memory, fading in and out. Something. Someone. Yes, someone was there, holding me, kissing me, and I was happy...
“...Manda,” he breathed.
“No silly, I told you, it’s Emily,” she said, and it sounded like she was half asleep. “Now go back to sleep, you need to heal. You’re not out of the woods, not yet.”
Not out of the woods. No, they were not out of the woods. And if that was not a dream, and it was real—and Stacey was quite positive it was all real, then they were heading toward something that tickled his spine with terror.
They were heading toward the End of all things.

The little girl sat on the floor of her playroom, floating the little ringed ball above her hands. She stared into the orb, lights flashing red and green and variating into all rainbow hues and beyond, the little rings pulsing with life about the ball. Manda stared, and smiled, and sometimes wept. Staring as if seeking answers in the depth of the orb, her magical crystal ball. The hologram of Saturn floated above her outstretched hands and she stared into the depths, and saw Joshua there, flickering, lying prone. Sometimes he was a very large man, bearded and slovenly, and at other times he was a magnificent beast, horned and plated. And sometimes she thought there was hope, and at other times she grew angry, because they always killed Joshua, always. Poor Joshua.
But they always killed Jack, always, and they always killed Stacey, always. That’s the way the people were, always killing the best of them.
Maybe there was something she could try. Something different. But maybe not. Or she could try it differently, but no, she had done that too many times.
Or she could wipe it all away, and start fresh, with something else.
The answers had to be there, in Saturn, because everything was there.
Manda stared into her glowing orb.