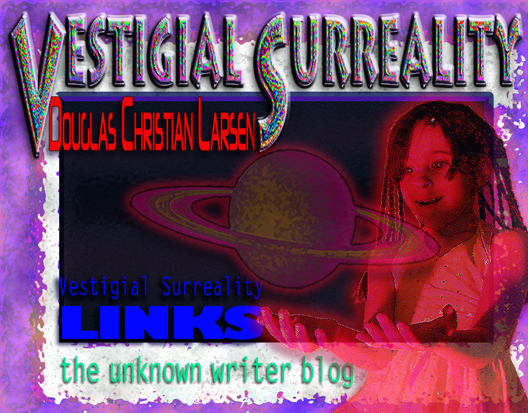 ves•tig•i•al
- forming a very small remnant of something that was once much larger or more noticeable.

sur•re•al′i•ty
- having the disorienting, hallucinatory quality of a dream; unreal; fantastic.

Vestigial Surreality
The World May Not Be Exactly What it Seems

Synopsis
A chance meeting in the park leads two strangers to discover strange connections between them and the world, and in truth both had felt that perhaps there was something not quite right with the world, something different. They have both noticed improbable coincidences popping up in their lives, at an almost alarming regularity, and now, meeting, they witness strange signs in the heavens, and find themselves on a bizarre path that will make them question their very reality, and the reality of the world and universe.

VS Origins
The origins for the serial Vestigial Surreality.

VS for e-Readers
Vestigial Reality for iBooks, Nook, Kindle, and e-Readers.

VS Wiki
Information regarding Vestigial Surreality.

VS Audio
Listen to episodes of Vestigial Surreality.

VS Omnibus One: Coincidence
Episodes 1-28 Collected in one complete e-Book.

VS Timeline
Timeline for the Vestigial Surreality biological beginning.


BOOK 1 COINCIDENCE
PART 1 WHITE RABBIT
01 — Jack.
Jack makes a strange acquaintance in the park.
02 — Stacey.
Stacey meets with Jack and they compare bizarre incidents of coincidence.
03 — Seven.
Seven observes a world through a unique interface, and notices something strange.
04 — Aajeel.
Kronoss and Aajeel meet while Seven eavesdrops, and then meets Number Six.
05 — Lord Dulance.
Number Six frets over an obsession while Jack and Stacey experience more oddity.
06 — Into the Sandbox.
Seven is bewildered when reality seems to buckle and bend before her.
07 — Confrontation.
Seven and Kronoss face off with six strange gymnasts from Mars.

PART 2 DOWN THE RABBIT HOLE
08 — Judgment Day.
Stacey and Jack and Seven meet two new strangers, while a strange courtroom convenes.
09 — World in a Locket.
Seven begins to wonder about reality when she hears a little girl say that "dada is dada."
10 — Apocalypse.
Stacey, Jack, Michael, and Joshua strategize over a meal, and then flee a shattering world.
11 — Awakenings.
Seven receives a surprise visitor. Jack and Stacey wake in a world that seems like heaven.
12 — Flight.
Jack flees a nightmare and makes a discovery high in a tree.
13 — Fight.
Stacey makes his stand and receives a reward.
14 — Transformation.
Seven makes a gruesome discovery and Six says goodbye, while Jack struggles with his fate.

PART 3 CURIOUSER AND CURIOUSER
15 — The Little Girl.
A little girl enjoys an adventure with a very handsome man, and Wolf makes a new friend.
16 — Bully.
Jack and Six meet a formidable bully, and Seven shares a surreal taxi ride with Manda.
17 — Lewis and Lewis.
The three friends regroup after a near-catastrophic encounter, and prepare for the next.
18 — Dragon Warriors.
Wolf, Jack, and Six head out into the dark to meet the long-coming showdown.
19 — High Vale.
Wolf acclimates to a new world, uses the facilities for the first time, and meets a nice girl.
20 — No Chitin.
Jack and Wolf meet a new playmate, and Seven flies to the rescue.
21 — Dream Place.
Stacey dimly wakes in an eerie world, and two new additions join the party for a reunion.

PART 4 CABBAGES AND KINGS
22 — The Deep.
Six is conflicted between love and lust, and Seven meets a formidable adversary.
23 — Sisters.
Seven travels to a dark place, and sisters discuss plans for the future.
24 — Sentinel.
Jack sets off for a secret adventure, and discovers an ancient wonder.
25 — Soul Mesh.
Seven explodes and is called away, and Maulgraul meshes with Stacey.
26 — MANDA.
Jack ascends the tree and meets a little girl named Manda.
27 — Pursuit.
Seven receives some enlightening information, an old nemesis reappears, and Stacey runs.
28 — Café Real.
Jack plunges into the truth, and enjoys some small talk with Old Ben and Manda.

PART 2 EVERY CHILD A WORLD
36 — HuManda.
Manda poises over terribly tough decisions, and Jack, Stacey, and Seven get all dolled up.
37 — Punchinello.
Jack and Anne visit a very strange Midnight Puppetshow on the Honey Moon.
38 — Camp Pug.
Emily aides Stacey in reaching allies, and they discover too much of a good thing ain't always good.
39 — Tesla Frankenstein.
Seven finds a means to enter the Honey Moon, and meets two fantastically mad scientists.
40 — Punch Drunk.
A night out at Punchinello's Theatre produces a clash of the great powers.
41 — Mad Hatter.
Mr. Dodgson conducts his wee programming train and delivers the party into the sky.
42 — Fever Visitations.
Jack and Stacey meet between worlds but are rudely interrupted by Punchinello.
PART 3 DARK RESISTLESS STREAM

43 — Shadow Tools.
In a hopeless plight, Jack remembers and comes into his own.
44 — Showdown.
Jack and Anne attend a hoedown at the showdown.
45 — Hell Redux.
Stacey goes to work, meets hellish creatures, and bumps into a new old friend in the park.
46 — Fetus in Fetu.
Stacey comes to Stacey and an old nightmare chases a new old friend into camp.
47 — The Whole Shebang.
Charlotte and Seven trip the light fantastic and virtually travel into the rings.
48 — Golden Gleam.
It's Anne and Jack's lovely wedding day, and Tesla has some advice for the happy couple.
49 — Neapolitan.
Emily and Stacey rise as one from the belly of High Vale.

PART 4 TOTALLY BONKERS
50 — In the Tween.
Stacey takes a new job on the beach, and enjoys a couple of beers with Maulgraul.
51 — High Tea.
Seven brings on a migraine while Tesla steps up to take action. 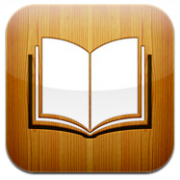 Get the Series Vestigial Surreality
now available at iBooks/iTunes