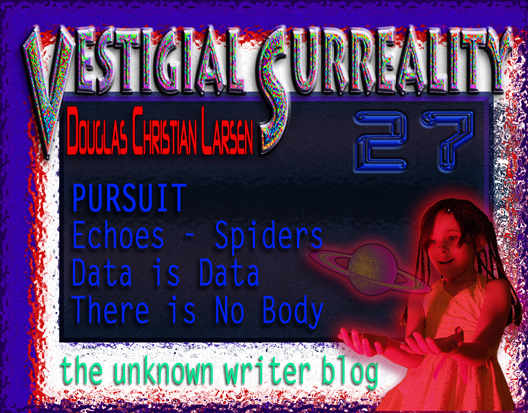 The great shaggy beast ripped through the foliage without even attempting to go around low-lying branches, it was almost as if the brute was attempting to scrape the tiny creature off the back of its neck, but the little animal clung grimly to the winding ram horns on either side of the brute’s wide head.
“It is still back there?” the shaggy beast rumbled, not daring to look back.
The small creature clinging between its horns did not need to glance over its shoulder.
“Don’t worry, it’s there,” the tiny creature chittered.
“That why I’m worrying, because it’s still there,” the massive beast grumbled.
“I will fly back and distract it, and you continue following Jack’s scent, otherwise we might lose the track,” Michael chittered.
“No,” Joshua grunted, digging in his paws, skidding to an abrupt halt. Michael catapulted from his perch between Joshua’s horns, going into an end-over-end tumble in the air, and then smoothly turning the trajectory into a neat and easy glide, opening up the flaps of skin beneath his arms, and soared to the trunk of a tree, where he landed lightly.
“Sorry about that,” Joshua rumbled.
“It was no problem,” Michael answered, chittering quite angrily, “though I do think you did it on purpose.”
“No, really, no!” Joshua swore, “I just think we need to face the big guy, together.”
“He’s bigger than you,” Michael said.
“Yeah,” Joshua answered, “isn’t that weird? I gotta say, I’m not used to anyone being bigger than me.”
“Perhaps we can talk to it, as many of the creatures in High Vale are quite fond of communicating,” Michael said, leaping to the ground and skittering back to stand near the massive ramdog. Joshua was plunked down on the forest floor, sitting like a dog, and was even panting like a dog, his long red tongue hanging out of his mouth. As all panting dogs look, Joshua appeared to be smiling. Michael found it somewhat comforting.
They were out looking for Jack, who had vanished from the Great House, and after some small scent and search, Joshua had picked up his track leading off into the forest, and after several hours of following the scent, they had nearly collided with the terrifying creature that they had only recently heard about, from Jack’s stories.
And then the nightmare monster crashed into view, smashing branches aside with six muscular arms. The bald monstrosity stomped toward them a few paces on truly massive hooves, and then when it noticed that they were no longer fleeing, the creature halted, glaring at them. It stood somewhere in the neighborhood of twelve feet in height, and with all its arms it looked an easy six feet wide. Its beady eyes glared balefully, and its block of a head seemed split by a gash of a mouth, exposing fat hunks of yellow teeth.
“Bad doggy!” the crooden warrior thundered, pointing three of its arms at Joshua, with three massive index fingers extended. “Only pet. Nice. But run. Bad doggy!”
The monster was louder than even Joshua.
Joshua responded by going up on all fours, and charging, directly at the giant.
“No Joshua, what are you doing!” Michael cried, leaping into the air, sending out a shower of sparkles.
The crooden warrior looked leisurely away from the charging ramdog, unconcerned, his gaze captured by Michael’s lightshow of faery twinkles. Michael looked like a star, hanging momentarily in the air, lights shimmering from his body like cartoon exclamation points of fire.
“Oooh,” he began, charmed, his murderous gash upturning in a smile. “Pretty—”
But Joshua, mid-charge, going up on his hind legs, surged forward as any good ram can manage, leading with his great horns, directing all his weight, strength, and momentum in his delivering punch, slamming his whole being into the crooden warrior’s belly.
The crooden warrior exploded in a blast of breath, collapsing backward, his six arms contracting like insect legs all about Joshua, and they tumbled end over end, first Joshua on top, and then the giant rolling over the ramdog, until they came to rest with Joshua standing on top, his forearms (or legs, they were kind of both arms and legs) planted on the crooden warrior’s massive chest.
Chittering in anxiety, Michael leapt to a tree trunk and launched himself into the air, gliding to another tree where he landed lightly upon a low-lying branch.
“Are you crazy?” he chittered at the ramdog.
For Joshua was frisking about like a puppy, actually licking the giant’s face, and wonder of wonders the crooden warrior was smiling, and laughing, half of his hands were scratching Joshua’s back, and the other three hands were petting the ramdog, big gnarly hands bumping over the dinosaur protrusions over Joshua’s spine.
“Strong doggy,” the crooden warrior grated, and Michael was shocked that something akin to a giggle leaked from the monster’s gash of mouth, he was actually smiling with all those yellow block teeth exposed—he was delighted with Joshua.
Michael had heard Jack’s story of how the giant had ripped the head off a horse the size of a Clydesdale, and feared that at any moment it might do the same thing to Joshua’s head. But at the moment, they were frolicking and enjoying each other, like any seven-year-old boy with his puppy.