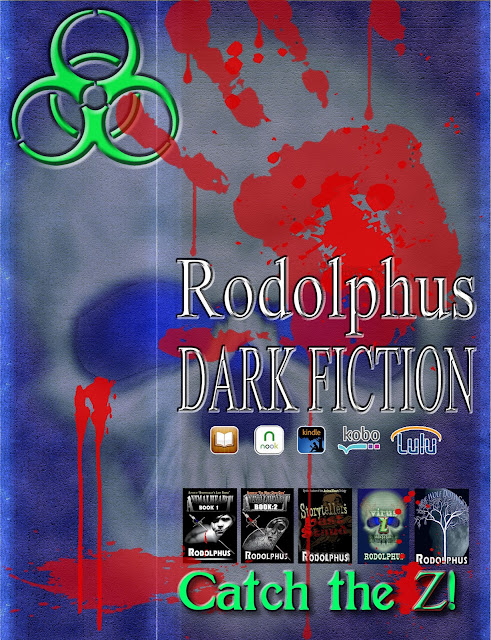 A family struggles to survive the unthinkable, civilization destroyed, as 90 percent of the population suffers an almost instantaneous change, ravenously turning to consume the remainder of humanity. These are not silly zombies, or cardboard targets, not fun zombies, nor cute zombies, but animated things inspiring creeping flesh and surreality. This is a whole new world for the children, or what remains. This is not a zombie story about zombies having feelings, or fears, or hopes. This is the story about a family clinging to hope while facing the unimaginable made too real.
Virus Z is already here.
It is extremely catching.
Catch the Z.

Savor the young adult terror. The walking dead novel that seems too real, a little too probable, and entirely too personal. These are zombies, done right, the way you've always desired your zombie. Moment by moment, facing a reality too gruesome to acknowledge. Rodolphus makes it all too palpable, a visceral mind-feast, and "Virus Z" is not for the faint of heart, or stomach. The zombie apocalypse is possibly closer than anyone wishes to admit, but everyone acknowledges the deep sense building in their heart of hearts, that the unthinkable is beginning, even now. Virus Z: Beginning of the End, savor the terror. Frightful for the entire family!
Virus Z: Beginning of the End
Rodolphus
Available at:
Barnes & Noble Nook eBook
Amazon.com Kindle eBook
Kobo - eBook
iTunes iBook

Read some FREE Virus Z: Beginning of the End!

A savage, violent, blood-drenched world produces the most terrifying villains. The universe answers with heroes and antiheroes in the cosmic conflict between evil and good. Flashing swords, rushing war speeders, poison, peril, giants, vampires, fighters and evangelists, Blackguard and fallen angels, Wolf and Bear, resounding with the clash of steel upon steel, the screams of the dying, and the faint blast of distant horns: it is a very dark world, but in steel halls of gloom, beauty yet survives. AnimalHeart, not for the faint of heart. A Rodolphus masterpiece.
AnimalHeart - Book 1
Rodolphus
Available at:
Barnes & Noble Nook eBook
Amazon.com Kindle eBook
Kobo - eBook
iTunes iBook
Hardcover - Lulu
Paperback - Lulu

The savage and blood-drenched contest continues in Book 2 of the AnimalHeart Trilogy. Harrison Christopher slowly dissolves as Wolf emerges, or as the Blackguard have named him, AnimalHeart. Heretic or hero, Wolf just might be more than a match for the great evangelist, Rettlaw Neslar, even if Bear is forming an unholy union with King Jim. Sliver and snake, demon and dragon, speeder and fallen angel, AnimalHeart Book 2 rockets toward its bloody conclusion. It is a very dark world, but in steel halls of gloom, beauty yet survives. AnimalHeart, not for the faint of heart. Book two of the Rodolphus masterpiece trilogy. Book 3 to be released soon.
AnimalHeart - Book 2
Rodolphus
Available at:
Barnes & Noble Nook eBook
iTunes iBook

A wild and rambunctious visitation to that legendary knoll in what just could be the most accurate depiction of the Custer massacre, except for the gleaming and well-oiled pair of anachronistic .357 pistols, that is. Earth Mother and Daughters, over-pumped cueball torpedo assassins, what just might be a were-hyena, time travel, and the edgy dark humor of Rodolphus make for a frenzied, page-turning, entertaining read. George Armstrong Custer comes to vivid light and life. Storyteller's Last Stand is dark and scary and funny, and very well might be the ultimate last stand for storytellers the world over.
Storyteller's Last Stand
Rodolphus
Available at:
Barnes & Noble Nook eBook
Amazon.com Kindle eBook
Kobo - eBook
iTunes iBook
Hardback - Lulu
Paperback - Lulu

When Kory began his bizarre game of sexual one-upmanship, he never bargained on the ultimate price he and Clarence would pay, nor the terror that would relentlessly pursue them. Strange beings rustle through the dark woods and the painting of Natasha seems to breathe and move. The dark and angry eyes of the wolf draw near, guilt personified, and savage justice approaches. Justice draws nigh, and horror. Still, there might yet be time for a little dryad love. Rodolphus wrote "The Wolf Doth Grin" at the age of 21. Now for the first time in e-read, the dark romantic horror that is both hilarious and terrifying.
The Wolf Doth Grin
Rodolphus
Available at:
Barnes & Noble Nook eBook
Amazon.com Kindle eBook
Kobo - eBook
iTunes iBook
Paperback/Hardback/eBook on Lulu 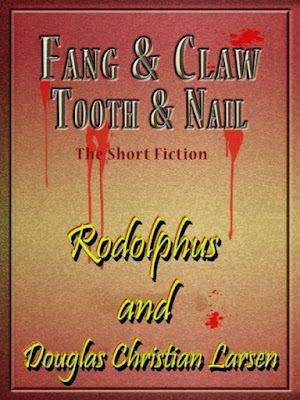 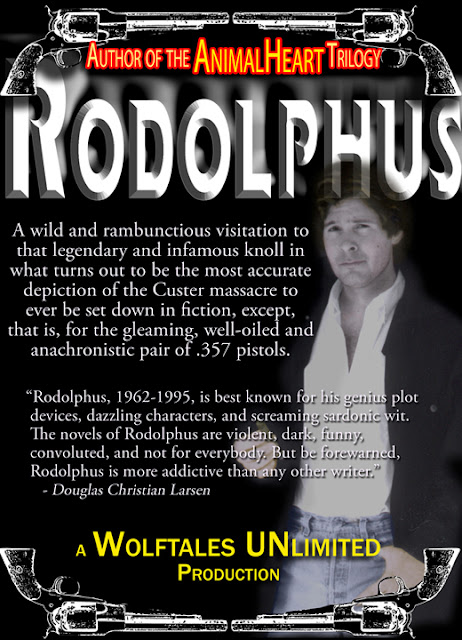 Rodolphus on Amazon
What is WRONG with zombies today?